There are many different work areas in agricultural facilities with different lighting requirements.

In our LED luminaire program for dust-/waterproof, hall, outdoor, emergency and ex-protected luminaires you will find high-quality and efficient lighting solutions for all these areas. Everything from a single source, "Made in Germany", unique and unmistakable.

We will be pleased to advise you!
Please contact us >

The reliable, efficient and species-appropriate illumination of stables is a particular challenge. LED luminaires for this application not only have to withstand mechanical loads and intensive cleaning processes with high-pressure cleaners, but also chemical loads, especially ammonia.

In addition, SCHUCH supports the InnoLED_4_Livestock research project as an exclusive industrial partner with its innovative LED lights for agriculture and livestock farming and is thus committed to increasing animal welfare.

Starting in April 2019, the luminaires were installed over a 21-month period in the pig fattening area, where the highest ammonia loads were expected. The installation was carried out in parallel with the existing luminaires in the selected fattening area, using the same switching procedures. Switching the luminaires on and off creates temperature differences in the luminaires so that stable air is drawn into the luminaire housing. The luminaires were removed every 2 months and measured for changes in lighting technology.
The project is now complete and the results have been analysed and published in a final report.
In contrast to many other studies and tests which only look at the ammonia resistance of luminaire materials, this project looked specifically at the effects of ammonia exposure on the photometric performance of luminaires. Only this approach allows a clear statement to be made as to the suitability of the luminaire for use in ammonia polluted environments.

Standard LED luminaires
The results have made it clear that the use of standard luminaires in stable environments with high ammonia concentrations is not advisable. The gases have a strong effect on the LEDs. There was a clear, continuous decrease in luminous flux of around 10-13% and a continuous increase in colour temperature due to progressive corrosion on the LED. The life of the luminaire is significantly reduced and replacement of these luminaires would be necessary to maintain good lighting in the barn.

Gastight LED lights (PRIMO XR 107..)
No significant changes have been made here. Thanks to the special gas-tight design of the PRIMO XR with its moulded FastConnect, ammonia gases cannot even penetrate the interior of the luminaire. The delicate LEDs are perfectly protected. This makes PRIMO LW the safest solution for use in livestock areas with high ammonia levels.

Conclusion:
The results of the research project have impressively confirmed the harmful gas resistance of both the LW luminaires and the PRIMO XR.

Light not only controls the biorhythm of humans but also of animals. Good, species-appropriate barn lighting promotes the well-being and health of the animals and has a positive effect on their performance.

For dairy farming, this means higher milk yields. Because good, uniform lighting without light/dark zones, for example between the barn, paths and milking parlour, increases the daily milk yield, especially in the dark season.

In pig farming, optimal lighting leads to better visual perception of the animals and thus ensures a significantly lower level of stress and aggression. The animals are more balanced, the meat is better and the yields are higher.

Poultry needs light that is as flicker-free as possible. Infinitely dimmable light with a low flicker index is therefore indispensable for species-appropriate poultry farming. It has a calming effect and reduces cannibalism and death rates. Good lighting promotes in addition the hens' willingness to lay eggs and the growth of fattening poultry and thus increases the yield.

Better working conditions in the barn

Good light also creates better working conditions in the barn. The eyes do not have to strain so much, animal controls are easier and the risk of occupational accidents is reduced. In addition, the use of modern, efficient LED light fittings with a long service life saves a considerable amount of energy and maintenance costs - a relief for the environment and the wallet. 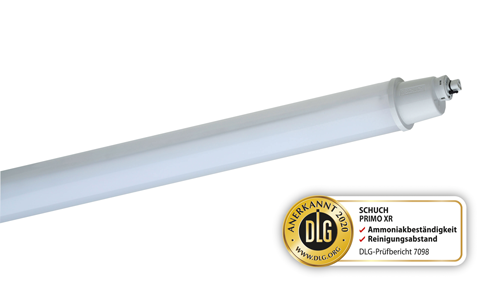 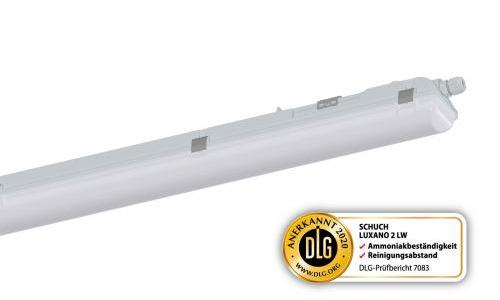 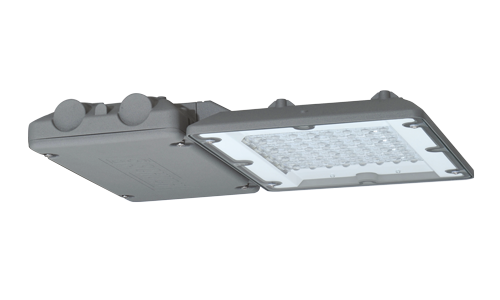 Which light fitting is the right one?

Selection table for the lighting of stables in livestock farming

In addition to basic requirements such as adequate impact resistance and resistance to harmful gases, lighting in livestock farming must also meet the special housing conditions and requirements for animal welfare. So which light fitting is the right one for which application?

1) According to the animal welfare and livestock keeping regulation, dimmable versions are required.
2) Since light fittings in poultry houses often have to withstand increased cleaning and disinfection requirements, the PRIMO XR LW DIMD is the best choice.